Divestment is the practice of selling a security or group of securities based on principal. Divesting from the fossil fuel industry (coal, oil, and natural gas) is one strategy that concerned individual and institutional investors are using to help reduce carbon emissions, fight climate change, and create positive environmental impact.

Fossil fuel free investing means more than simply moving your money out of coal, oil, and natural gas producers. After divesting from companies that extract, process, or transport fossil fuels, investors have to determine how to responsibly reinvest those funds. Responsible reinvestment strategies should take the best interests of both the investor and the planet into account.

At Earth Equity Advisors, we are experts in sustainable and ESG investing practices and we follow a strict fossil-fuel free investment policy. We help our clients divest from fossil fuels and reinvest in responsible alternatives. The following information will help you consider the potential impact of divestment and your options when building a fossil fuel free investment portfolio.

Climate change is one of the biggest challenges facing humanity and investors can be part of the solution.

Scientists agree that burning fossil fuels for energy is changing our climate. The earth’s climate warmed 1.9° Fahrenheit over the last century (source: NASA) and greenhouse gas emissions caused by burning coal, oil, and natural gas for energy are the leading cause. Unless we figure out how to curb carbon emissions, the environmental impacts of climate change are expected to get much worse. The 2019 report from the Intergovernmental Panel on Climate Change (IPCC) predicts that global temperatures are likely to increase by 2.7°F (1.5° Celsius) before the year 2052. That may not seem like an enormous jump, but the IPCC agrees that this change will lead to life threatening sea level rise and weather events including heat waves and storms.

Divesting from the fossil fuel industry may not directly impact those companies—at least not yet, more on that later—but divesting does free up capital that investors can then put into innovative alternative energy companies and other industries that are working to solve the climate crisis at scale. 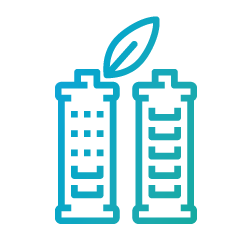 How Investments Can Lower Our Carbon Footprint

Many people are taking steps to reduce the amount of carbon dioxide, methane, and other greenhouse gases they are responsible for producing. The total of your greenhouse gas emissions is your “carbon footprint.” According to The Nature Conservancy, which offers a free Carbon Footprint Calculator, the average carbon footprint per person in the United States, at approximately 16 tons, is the highest in the world. For comparison, the global annual average is closer to 5 metric tons per capita (source: The World Bank).

You may be aware that your carbon footprint includes the greenhouse gas emissions produced by heating and powering your home, your travel habits, even your diet.

But what about how you invest?

Increasingly, people are beginning to add the greenhouse gases generated by their investment portfolios to their carbon footprint. Just as people are changing their personal habits to combat climate change, more investors are selling off their fossil fuel holdings and investing in a clean energy future to reduce their overall carbon footprint.

Shifting away from fossil fuel investments is only one step toward lowering your carbon footprint. The most common reason we hear from investors who are considering divestment is that they would rather use their money to support the development of clean energy alternatives to fossil fuels. Most see divestment as an opportunity to support the development and scale of renewable energy solutions, such as wind, solar, or geothermal energy technologies.

There are multiple answers to the question of whether or not divestment works, depending on your perspective.

Has this growing divestment movement had a direct impact on the bottom line of the fossil fuel industry? Arguably, no. An investor doesn’t directly hurt a coal company when they decide to sell their stock. At the end of the day, not owning a fossil fuel producer’s stock doesn’t affect that company at all. They still have more than enough buyers.

But, you must remember that change often takes time and the movement toward divestment and fossil fuel free/ESG reinvestment is on a trajectory for long-term momentum.

There are examples from history where divestment as a strategy has definitely worked to create significant change. In the 1980s and 1990s, investors divested from companies doing business in South Africa to oppose apartheid. Divesting from South Africa to protest apartheid was the first major use of divestment as a strategy to create change. This action is widely considered to have been a contributor in the eventual fall of the government as divestment from South Africa dried up the funding that drove the regime. There is a difference between the historic divestment movement that led to regime change (and the fall of apartheid) in South Africa, and divesting from fossil fuels—it doesn’t dry up the funding for fossil fuel companies if you buy other stock.

If your goal is to personally reduce your carbon footprint through a more sustainable portfolio and you sell your fossil fuel stocks and divest from investment funds that contain oil, gas, and coal, then yes it will work, especially if you reinvest that capital into renewables and other sustainable solutions.

The true power of the individual lies in investing differently—investing in sustainable solutions and a low carbon future.

One of the biggest misconceptions about fossil fuel divestment is that it will negatively impact your portfolio’s performance. Many traditional financial advisors recommend that investors have to “own the whole market” (suggesting that diversification across the entire market is much safer than divesting from any one sector).  However, a growing number of studies have shown that, In most cases, the act of divestment neither hurts nor helps portfolio performance.

A 2017 study by GMO Investment Management. studied the financial impact of fossil fuel divestment and determined that opting to divest has “very little effect” on performance. Jeremy Grantham, who is himself a strong proponent of decarbonization, is the founder of GMO Investment Management. Over the long term, Grantham sees potential benefits for those who invest in a clean energy future and increasing risk for those who remain invested in fossil fuel companies. In a recent interview released by GMO Grantham offers his vision of this coming transformation:

“The transition to a fossil free economy will take literally trillions of dollars and much of it may come with very satisfactory returns. The rate of change will be exceptional. There will no doubt be vicious cycles and picking winners from losers will be more than normally difficult. In investing there are never guarantees of success. We can be sure however of two things: one, the top-line revenue of new greener technologies will be well above average as their share of the economy grows and two, the share of fossil fuel companies will decline.” –Jeremy Grantham

Choosing a Green Investment Strategy for Your Portfolio

Many investors that are concerned about global warming look for alternative investment opportunities in renewable or clean energy, but there are a wide variety of responsible investments available across many sectors. A fossil fuel free portfolio may include investments in:

How to Get Started and Find Fossil Free Funds

Discovering what you own is the first step to becoming a fossil fuel free investor.

If you aren’t sure about the investments in your retirement fund, 401(k), or pension fund, there are tools you can use to examine your portfolio and uncover any coal, oil, or gas holdings that might be lurking there.

If you uncover any fossil fuel investments in your portfolio, you will need to make a plan for divestment and reinvestment that takes your preferred investing style, risk profile, and financial goals into account. That may involve seeking out fossil free versions of what you already own or equivalent alternatives. For example, you might wish to replace an investment in a large company, domestic stock fund with a fossil free alternative from Green Century. Green Century excludes coal, gas, and oil companies and utilities that burn coal from its Green Century Equity Fund and Green Century International Index Fund. Another option might be to reinvest in one of the funds offered by Parnassus Investments, which adopted a fossil fuel free policy in 2019.

To make a reinvestment plan in one of these funds, or to explore other options, you may wish to seek the help of a financial advisor or firm, like Earth Equity Advisors,  that specializes in SRI and ESG investing. Consulting a professional who is experienced in fossil fuel free investing can help you save many hours of research and paperwork.

If you do wish to go it alone, there are a variety of online tools you can use to find and research fossil fuel free funds and other responsible options. There are an increasing number of fossil free mutual funds, equity funds, ETFs, and other investment products available to retail investors. Many investment funds are now marketed as “fossil fuel free.”

The Forum for Sustainable and Responsible Investment (US SIF) offers a Sustainable, Responsible and Impact Mutual Fund and ETF Performance Chart (using data from Bloomberg LP) that shows all of the options for sustainable, responsible, and impact mutual funds and ETFs offered by its institutional member firms. This tool can help individual investors compare costs, financial performance, voting records, and other details about various socially responsible funds, including many that screen out fossil fuel companies.

How Earth Equity Advisors Can Help

Since 2004, Earth Equity Advisors has specialized in sustainable and responsible investing, and we perform the due diligence necessary to help you invest fossil fuel free. Our Impact X Ray can show you whether or not you are currently invested in fossil fuels, take steps to divest and reinvest in positive solutions.

Isn’t it time you started investing with your values?

Get Started
Scroll to top