A Conversation with Nzinga Shaw, Chief Diversity & Inclusion Officer for the Atlanta Hawks 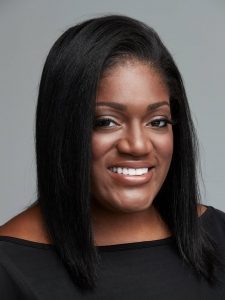 Organizing this event with the entire Earth Equity team, I’ve come to learn a lot about Nzinga Shaw, our honored guest at Inclusion & the Next Economy: A Solutions Based Conversation. I knew that Nzinga was an alumna of Spelman College, the University of Pennsylvania, and was a study abroad scholar at Oxford University in the United Kingdom. Her official bio highlights that her academic settings have enabled her to experience rich diversity while studying among a wide array of individuals hailing from all around the globe. Before becoming the first Chief Diversity & Inclusion Officer in the NBA for the Atlanta Hawks & State Farm Arena she served as Senior Vice President, Diversity & Inclusion Officer at Edelman, the world’s largest and most profitable public relations agency. She also worked in human resources at Essence Magazine, the Yankees Entertainment & Sports Network, and the National Football League. Shaw is also on the Board of Directors of the National Black Public Relations Society and the Georgia Diversity Council.

Still, I wanted to have a personal conversation with her before our event about her role in the Diversity & Inclusion space (D&I). Our conversation follows:

KR: Did you see a clear path from your university studies to your current position as a leader in D&I? What was that journey?

NS: I don’t think that I recognized that there was a journey to D&I from academia. When I was studying as a student both at the undergraduate and graduate level I was really there just to learn. Unlike some college students who have a path that they know they want to pursue, I was very different. I was very interested in learning for the sake of learning and have let life lead me where it did organically. I don’t think there were many jobs in diversity and inclusion when I was in school.

KR: What was the first role that you had in D&I?

KR: You are the first person to hold Chief Diversity & Inclusion Officer role in the National Basketball Association and you were essential in creating that role. How has that evolved since you started?

NS: Originally, I was brought on to the Atlanta Hawks from Edelman to manage a public facing crisis that our franchise was facing, involving race relations. It was at the forefront of what was happening with our brand at the time and it was a very reactive situation that was caustic. As we were developing out the strategy I made the recommendation that the organization bring on a diversity officer, because having someone accountable for that work day to day could help alleviate some of those ills that were happening internally. The CEO agreed that was the way to go and that it could be proactive for the league to get involved in this space so I ended up applying for the job. After [Edelman] left and after working with the [Atlanta Hawks] team so closely and knowing that the people who were left behind were great people, I wanted to embed myself on the team. So, in the beginning my role was very reactive but the evolution of the role has really changed from a tragedy to a triumph.

We’ve now championed the role of diversity and inclusion at all levels of the organization, and not only racial integration but also thinking about sexual orientation, thinking about sensory inclusion, thinking about ALL the racial demographics that we serve here in Atlanta. And the list goes on. So, I would say that where we were just focused on one distinct issue 4 years ago when I started, we’re now starting to think about this work strategically and how it integrates with everything that we do from a business perspective.

KR: Wow, I didn’t realize that people within the autistic spectrum disorder were included in the Hawks’ D&I initiatives.

NS: Yes, we’re actually the first team in the Southeast to build a sensory inclusion room in our arena! Families that have challenges or perhaps a child that has autism or a sensory need, or even the veteran population that may suffer from PTSD, now have a safe space that’s not going to be loud and they can really just enjoy the game and feel comfortable.

KR: Beyond front office jobs and organizational jobs, what inclusion and diversity strategies do you have for fans and the community?

NS: I would say that the [internal HR] part is only about 30% of what I do, which is what I call internal engagement. That’s all about the employee experience, so how we find job candidates and once they are hired what type of programs are we putting together to make them all have unique experience. As a diversity practitioner, I take my craft very seriously and I understand that people show up in different ways. Perhaps they dye their hair blue or perhaps they wear ripped jeans to work but that doesn’t mean that they’re not creative or that they’re not analytical or that they don’t bring a unique ability to the workforce.

A large part of my job is fan experience and community engagement. That means reaching out to new and unexpected communities, and emerging communities, to get them integrated and build bridges through basketball. For instance, Atlanta has a large Hispanic population. Out of a city of 6 million people there are 1.3 million Hispanics in Atlanta, yet historically we have not been able to draw a large Hispanic fan base because of a lack of engagement on our part, or a lack of strategic engagement on our part to engage by making a bridge between language barriers [In 2014, the Atlanta Hawks announced a Spanish language radio collaboration with a local Spanish language station].

Also, from the LGBTQ perspective, we were the only sports team in Atlanta to march in the PRIDE Parade 4 years ago and now we’ve been marching for 4 consecutive years. We’re trying to build bridges to that community because I think they have been ostracized for so long from the professional male sports community. It’s been very taboo to come out and be an openly out athlete. The Hawks have gone over and beyond to partner with organizations like Lost-n-Found, which is a home for LGBTQ youth who have been ostracized from their family. We’re building basketball clinics and teaching leadership skills, and we use our platform of basketball to build that bridge.

We’ve renovated basketball courts throughout the city of Atlanta so that kids who live in marginalized communities can now have access to play in a safe space.

So, I would say that the bulk of my work is rooted in community because that’s really who we serve. We serve people from all over Atlanta and you don’t have to have discretionary funds or the money to attend a game in order to be a fan. We have to understand that for people who aren’t going to be season ticket holders or for people who aren’t going to come out to 41 games a season there’s still ways for us to connect and it is truly on us to reach out to them.

KR: At this current time, a lot of citizens feel that the system is rigged. A position such as yours works actively against that assumption. What’s the biggest opportunity for advancement in the D&I space?

NS: I mean, honestly, it’s going to take the people who are at the top of the organization, which are traditionally white men, to decide that this is something that they want to change. People that are either marginalized or do not feel empowered are not going to be able to change the ills that are harming them and making them suffer by themselves. It’s easy for a person of color or anyone who happens to be in a marginalized community to understand the ills that impact them, but they obviously are not the dominant culture and do not have the power to make those changes alone, or we wouldn’t have inequity in the workplace. Organizations are going to have to make a conscious decision that they want to invest money in D&I programming and that they are going to take a chance on high-performing, high-potential talent that does not look like them. That’s where it’s going to start.

KR: What or who inspires you?

NS: My daughter. My daughter inspires me. She is the light of my life, she makes me think about all of the possibilities for the future. She gives me hope that the world can be a better place than it was when I was growing up. She’s in a very multi-cultural school that is not segregated and I see so much hope for equity and for equality looking through the lens of her eyes. So, she inspires me to continue to do this work because I know that I can hopefully shape and change a generation.

Thank you again to Nzinga.

This is the first year that the Earth Equity Speaker Series will be featuring a topic other than environmental sustainability and I’m so proud of it! I hope you’ll be able to attend.

There will be limited seating, so get your free ticket today and please share with your friends and family. I look forward to seeing you there!