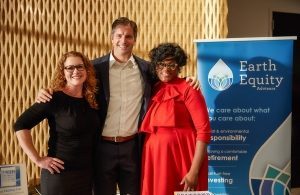 For this year’s speaker series, Earth Equity Advisors welcomed Nzinga “Zing” Shaw, Chief Diversity & Inclusion Officer of the Atlanta Hawks, and Betsy Moszeter, COO & Partner at Green Alpha Advisors based in Boulder, CO.  The topic was ‘Inclusion and the Next Economy: A Solutions Based Conversation,’ and we found their conversation truly uplifting, especially at a time when the news can be so far from that.  Both made a strong case for the benefits of inclusion – Zing from a community engagement/stakeholders’ perspective and Betsy by highlighting the success of companies with diverse leadership.

In response to a PR crisis, the Atlanta Hawks was the first NBA team to create the Chief Diversity & Inclusion Officer role, and Zing was the first person to hold that title. Since then, additional sports teams have adopted similar positions.  Zing shared her challenges and her victories while shaping this role.  As an example, she started a program called ‘Difficult Conversations’ after noticing how the employees were struggling in response to news surrounding the Pulse nightclub shooting. Rather than keeping these discussions around the water cooler, she brought in subject matter experts to educate and validate employees’ thoughts and feelings on a variety of heavy, and at times controversial, topics. By having these conversations, employees were able to find a variety of ways the Atlanta Hawks could be more involved in their community (ultimately bringing in a diverse group of fans).  Following the Pulse shooting, they formed a partnership with a halfway house for LGBTQ+ minors who were estranged from their families, a direct example of social responsibility in their community.  The strategic imperative of diversity and inclusion is now imbedded into the culture of the Atlanta Hawks organization, and informs how they prioritize resources and focus. 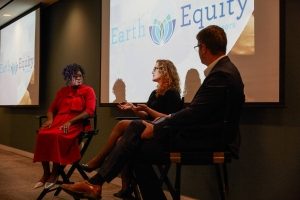 It was also fascinating to hear from Betsy, who has spent nearly two decades in the financial industry – a field not known for being inclusive.  She had planned to avoid the industry altogether since she did not want to be part of a predominately white and male culture, but she ended up changing her mind after finding a company with a more diverse culture than the average financial services firm.  From there, she transitioned into the impact investing field.  Since joining Green Alpha Advisors, she has done extensive research for their gender lens portfolio (the Next Economy Social Index).  For a company to make this list, it needs to meet all their first line criteria of social and environmental responsibility, and then the companies are screened for significant female leadership at the corporate and board level.  It was especially enlightening to hear Betsy cite a recent Credit Suisse study describing the financial benefits of having even one female board member at a company (a potential increase in the stock’s performance of over 3%), and how that impact continues to grow as females make up 50% of a board (a potential increase of over 18%!).  A diverse leadership team provides an environment for creativity and innovation to thrive, as companies tackle solutions for pressing challenges.

As Nzinga pointed out, it would be better if more companies made efforts to be inclusive before a PR crisis and were proactive in these efforts; and Betsy described the financial motivation to have creative collaboration from all stakeholders as corporate decisions are made.  Hopefully the number of companies embracing these practices will increase as they realize the direct impact inclusion has on the bottom line. Even though we went into the conversation already believing in the importance of inclusion, we left feeling encouraged and motivated.